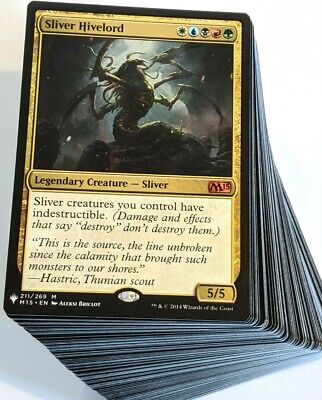 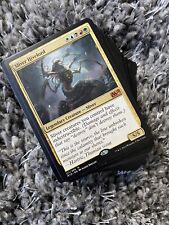 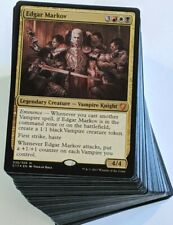 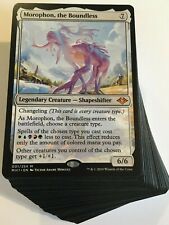 This listing is for a custom magic the gathering Commander/EDH deck. This is a complete ready-to-play 100-card deck, and all of the cards are authentic English-version magic cards. I took several pictures that show all of the cards in the deck, so please look at those pictures so you can see what all of the cards do and how they interact with each other. Slivers decks are a lot of fun. A single sliver is usually harmless, but when you get several of them on the battlefield they can become huge and unstoppable. The problem with most sliver decks is that an opponent will often play a board wipe that destroys all of your creatures before you can get enough slivers on the battlefield to do any serious damage. This deck solves that problem by making Sliver Hivelord the commander. When Sliver Hivelord is on the battlefield all of your slivers are indestructible. This deck also includes several board wipes of its own that kill every creature on the battlefield except for your slivers because they are indestructible. Just one of these board wipes can often turn a competitive game into a guaranteed victory. Most if not all of these cards are in Near Mint or Mint condition. Here is the complete list:

Shipping in the USA is free!  See my other magic card listings by clicking here:  https://www.ebay.com/str/thursdaynightmagic

*To receive these free rares, you must purchase all of your items at the same time.

**These rares will be randomly picked by me from my box of extra rares, so please do not request specific rares from me.